I would like to share a quick story that has changed a life, actually many lives. I recently had the privilege of teaching a CPR AED class to the coaching staff of the fitness gym that my wife and I currently belong to. It was another great class filled with fun and an abundance of learning.

Two months later one of the coaches who took the class that I don’t see often (as we workout on opposite times) came to me wanting to share a story. His mother, who lives in Minnesota, had suffered a sudden cardiac arrest while she was out doing her daily activities a few weeks prior. A bystander recognized the symptoms, engaged the adult chain of survival, and began doing chest compressions. EMS arrived approximately 5 minutes later, delivered one shock, and got her pulse back. She was taken to the hospital for evaluation and is currently doing just fine.

The coach was grateful beyond measure that a stranger would take action to help save a life, his mother’s life. Here is the crazy part, they still don’t know who the stranger who stopped to help is. They have gone back to try to figure out who helped his mother interviewing all people who were involved in her care. All he wanted to do is show his gratitude to the person who helped his mother. And there lies the beauty of what happened, action was not taken for fame, to be recognized, or even to get on TV. What ever the stranger’s training was, that person had taken a class, decided to take action, and saved a life.

Find out more and become a CPR Instructor with us. Already a CPR instructor? Affiliate with our training center for affordable pricing and excellent support.

Interested in helping us fulfill our motto of “Lifesaving Made Easy”? Check out what it takes to join our team and search open positions.

100% Certification Acceptance
We promise your employer, school, or agency will accept the certification card we issue to you. If there is a question of acceptance or validity, simply send us an email at training@triosafety.com with full details. We will reach out to the individual/entity and provide accreditation information. If still there’s a question, we will provide you with a full refund of your class fee. It’s that simple.

100% Same-Day Certification Cards
If you prepaid for class, you’ll always receive your official certification card the same-day of your open enrollment class, or your card is free. Now that’s easy. 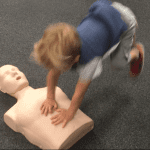 Can Your Child Save YOUR Life?CPR, Heartsaver First Aid CPR AED Training