One call can help bring lifesaving resources to an emergency virtually anywhere in the United States. One call initiates the chain of survival that can help successful resuscitation’s among cardiac arrest patients. In a way, one call does it all. That, of course, is an emergency call made to 911.

Lets talk about the history of 911 first. Do you know what is common between 911 and Alabama? In late winter of 1968, the very first 911 call was placed in the small town of Haleyville, Alabama, between the state’s Speaker of the House to a United States representative across town.  The very first word received on the 911 line was simply “hello” uttered by the United States representative.

But why does this matter to you? The year 1968 began the national emergency activation number, or 911, implementation.  In the early days, a 911 call was routed through a switchboard in into the appropriate emergency dispatcher. From there, the dispatcher had to collect the necessary information and dispatch the responding units. In some cities, including New York, this meant that certain fire boxes were activated and responding units directed to these pre-mapped locations. In other cities, an emergency alert siren was sounded and nearby responders were thereby alerted of the emergency.

Nowadays, public safety answering points, or PSAP’s, have taken the place of dispatch centers and can handle emergency response coordination and communication of police, fire, and EMS. Nearly 240 million calls are made to 911 annually in the United States alone, with over half of those calls coming from a cellular device. In some states, 911 can be accessed via text message or other SMS technology. This is received in a similar way to the teletypewriter, or TTY, used by the hearing impaired.

Another new technology implemented to access 911 is the VoIP.  This is convenient for residences that simply do not have home phones but maintain Internet access. Being able to quickly contact emergency response and actually provide address and emergency information is critical to saving lives. Accordingly, hotels nationwide are required to provide direct access to 911 from room phones instead of having to dial a one, zero, or nine as a prefix. This is great news for simplicity sake if you are a frequent traveler.

Here are some helpful tips on how to share your emergency with a 911 dispatcher:

If you have children, it’s always a good idea to help them learn how to call 911 and what to expect during an emergency. Be sure to post emergency contact numbers and other emergency information in a familiar place in your home.  Obtaining your local poison control center number, non-emergency numbers, and public utility numbers are also a good idea.

Did you know that any phone that could have access to a network must be able to connect with 911? The Federal Communications Commission enacted this provision to ensure that all persons are able to reach for and obtain emergency assistance when needed.  When calling from a phone that has been deactivated and no longer associated with the network, the 911 dispatcher sees only a special number that is not associated with the specific phone. In this instance, it becomes virtually impossible for the 911 dispatcher to reconnect the caller from a deactivated phone if the call is lost or dropped.

One of the more common myths regarding activation of the 911 system is that dispatchers always know where the caller is located. In some situations, this may be true if the 911 call is placed from a verified landline at a residence or business. However, the dispatcher still must verify the address information to ensure appropriate direction of responding units. Additionally, cell phones provided limited information as to the location of the caller.  Some jurisdictions are able to receive the address for the nearest cellular tower used by the caller, while others are able to, through technology, triangulate the position of a caller in an unknown location.  One of the best ways to expedite the response of emergency services is to always be familiar with your location as well as address, street, and geographic information nearby.

Check with your local public safety answering point or 911 center to find out if two routers are offered of the facility. Observing firsthand the call taking and dispatching processes can help you better understand exactly how the 911 system really functions.

9-1-1 AED Ambulance Cell-phone CPR Emergency Response EMS First Aid First Responders PSAP
What’s the number for 9-1-1?2016-06-012019-02-12https://secureservercdn.net/45.40.148.147/4x7.b8c.myftpupload.com/wp-content/uploads/2020/05/logo-website-revised3.jpgTrio Safety CPR+AED Solutionshttps://secureservercdn.net/45.40.148.147/4x7.b8c.myftpupload.com/wp-content/uploads/2016/06/post-911.jpg?time=1594144336200px200px
About
Brady McLaughlin
Brady is a passionate, servant-minded leader in the emergency response and management specialties. He currently serves as CEO of Stop Heart Attack & Trio Safety CPR+AED as well as part time as a state police agent, professional firefighter/ EMT, adjunct university instructor, and DHS incident command instructor. He is married to his high school sweetheart, Malynda, and they have two young sons.Because of the overwhelming need for quality and adaptive safety training, Brady founded Trio Safety in 2012 to help educate others in the areas of CPR, emergency response, and safety. Brady brings his extensive experience and education in the field of emergency response to the classroom for students to fully engage and understand real life emergency scenerios in the event that someone must perform life-saving CPR or first aid skills. Over 65,000 students have received training through Trio across the country.Trio merged with Stop Heart Attack to bring the best variety of affordable and dependable life-saving devices to you, including AEDs and bleeding control kits. Together, Trio & Stop Heart Attack can equip you for success when seconds count.
Contact Us
BIRMINGHAM
HUNTSVILLE
MONTGOMERY
Teach People How to Save Lives

Find out more and become a CPR Instructor with us.  Already a CPR instructor?  Affiliate with our training center for affordable pricing and excellent support.

Interested in helping us fulfill our motto of “Lifesaving Made Easy”?  Check out what it takes to join our team and search open positions.

100% Certification Acceptance
We promise your employer, school, or agency will accept the certification card we issue to you. If there is a question of acceptance or validity, simply send us an email at training@triosafety.com with full details. We will reach out to the individual/entity and provide accreditation information. If still there’s a question, we will provide you with a full refund of your class fee. It’s that simple.

100% Same-Day Certification Cards
If you prepaid for class, you’ll always receive your official certification card the same-day of your open enrollment class, or your card is free.  Now that’s easy. 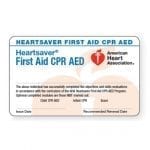